I know, I know. You’ve read at least twenty recaps offered by every single online newspaper that showed up on your facebook newsfeed. What I’m offering here is a synthesis of book theories and film theories and a lot of nerdy angst.

My question is: why was Jon Snow’s body not burned on a pyre? I know that Davos has been busy planning what to do next, but it does seem a rather risky way of playing things. After all, this close to the wall, dead bodies don’t tend to stay dead. Just saying. 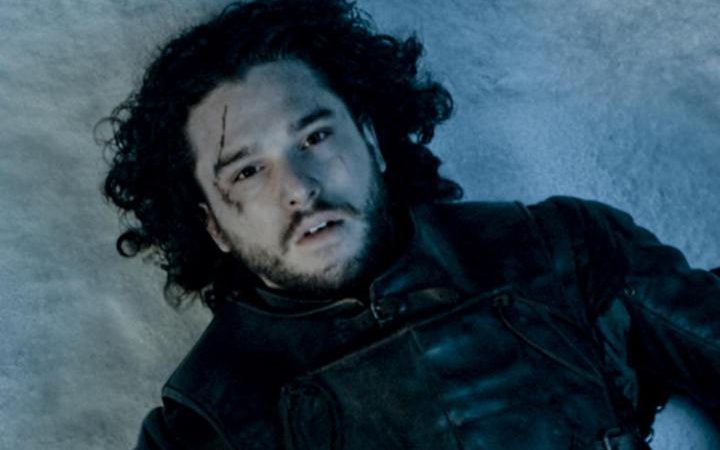 Might be nice to have a Jon Snow with electrically blue eyes though.

Of course, the fact that Jon Snow hasn’t been burned yet means that theories of his resurrection still abound. The most popular seems to involve Melisandre, the red priestess. Thoros, the red priest who appeared earlier in the series, was responsible for bringing Beric Dondarrion back to life. So film viewers and book-readers hope Melisandre will work magic on Jon Snow by analogy. Her drained appearance as an old woman at the end of this episode seems only to have fuelled the rumours that she will be involved in his resurrection. For example this article from the Independent outlines quite a neat theory: http://www.independent.co.uk/arts-entertainment/tv/news/game-of-thrones-season-6-mellisandre-reveal-jon-snow-dead-resurrection-azor-ahai-shiera-seastar-a7001196.html

My personal theory doesn’t involve the red priestess. It does, however, involve quite a lot of wishful thinking, northern Stark pride and a character who appears in the books, but does not appear in the films.

His name is Coldhands. He is responsible for rescuing Samwell Tarly and he guides Bran Stark in the lands beyond the wall.

I used to have a theory that Coldhands was the body of Benjen Stark as a wight. I used to think that Starks did not become mindless wights. I thought the idea made sense, as it was the Starks and the wildlings who destroyed the Night-King in the Night Fort. It would explain why there always needs to be a Stark at Winterfell. It would makes sense to have a family who couldn’t easily be destroyed by the White Walkers to keep the fortress closest to the wall. I thought this would mean that Jon Snow would be resurrected, but as it were, still dead. He’d be walking about with blackened hands, electrically blue eyes (!), and last but not least a working intellect.

But then, this appeared, which is apparently an annotated copy of George R. R. Martin’s manuscript of  Dance with Dragons: 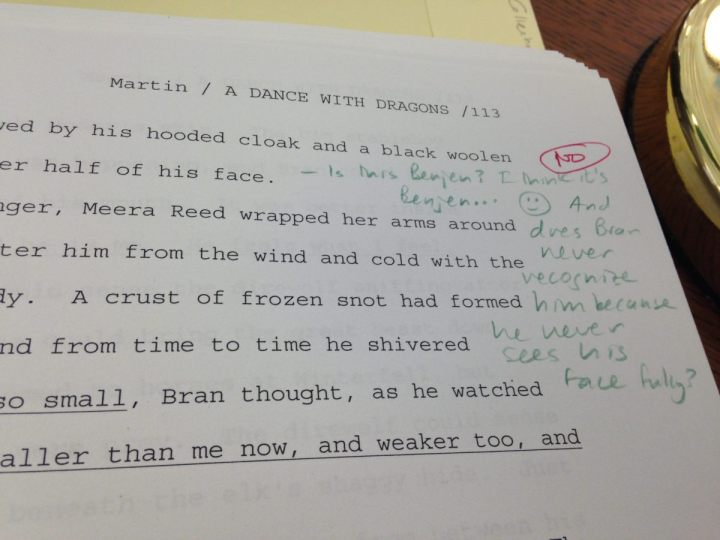 So George R. R. Martin’s editor had the same theory as me, which he marked in green pen. He writes next to a description of Coldhands ‘Is this Benjen? I think it’s Benjen.’ The cruel ‘NO’ written in red is by George R.R. Martin himself. There goes my theory about Coldhands and the Starks then. Or does it?

The only thing George R. R. Martin denied was that Coldhands was Benjen Stark. But he might be another Stark, not specifically Benjen… Which leaves open the possibility that Jon Snow might wake up with eyes of blue in the next episode, while the Red Priestess is still moping in her room about how Stannis wasn’t her prince charming Azhai after all. I’ll keep my fingers crossed.