I chose to read this book at the end of last year, as a quick fix to my rather low looking Goodreads reading challenge numbers. I had bought it a few years ago, after reading all the rave reviews.

I live in Cambridge, UK and every summer the cows are allowed to roam the fields close to the city centre.

It is hard not to notice that cows are social animals

Keen to join other people’s picnics… 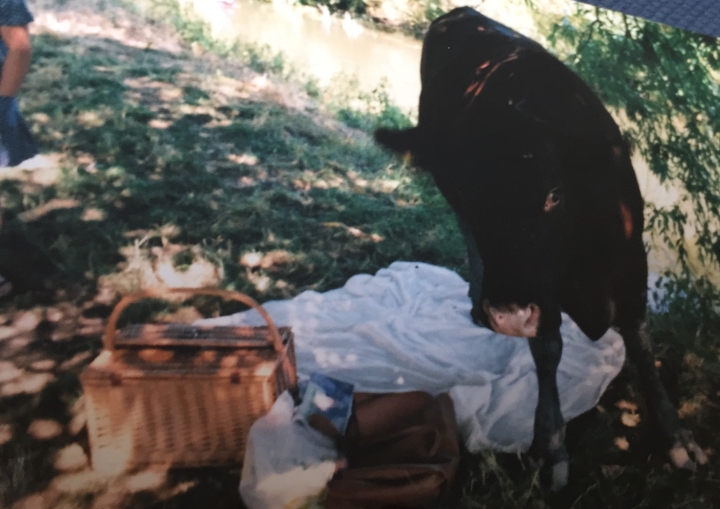 And not terribly keen on cyclists!

You can see already why I was looking forward to reading Rosamund Young’s account of her farm.

She calls her cows by their names – and the edition of the book I had provided a genealogical tree at the beginning to help one keep track of the various cow family members. Young does not stick to chronological order, and even with the cheat sheet I sometimes felt confused.

What does come through her account is the individual characters of the cows. Some are great mothers and grandmothers, and some prefer to hang out with friends their own age.  Many cows hold grudges – one held an aversion to a worker’s wooly hat, and took it off him whenever possible.  Some are fonder of human attentions than others,

The anecdotes are charming, and the book itself is blissfully relaxing. That said, I do think the narrative would have benefitted from a tighter editorial intervention. I think it would have lost none of its charms if more links had been introduced between each short note.

Young also introduces a few stories of other farm animals – particularly sheep and chickens. My favorite anecdote was about a chicken who had lost a leg to a fox and spent the rest of her life accompanied by two chicken ‘friends’. They always made sure she had enough to eat before they started eating themselves.

My one grudge is that Young not only seems to believe in cow homeopathy (like Prince Charles), but she gives a hint that she is against vaccinations – which is strange. The overuse of antibiotics in farm animals is the source of great problems and growing antibiotic resistance.  But vaccinations seem simply common sense to me!

P.S. All photos of cows in Cambridge featured in this blogpost are my own.