When the previous episode finished last week I thought the finale would have to be underwhelming. ‘The Winds of Winter’ cannot top ‘the Battle of the Bastards’, I thought. How mistaken I was…

First of all, the opening scene in King’s Landing and the destruction of the Sept of Baelor. I had been rooting for Margaery Tyrell. That was a considerable strategic error. While the Tyrrells’ had engaged the High Sparrow in a war of wits, Cersei was only interested in fights that involve weapons.

It rather reminds me of this scene from season one. 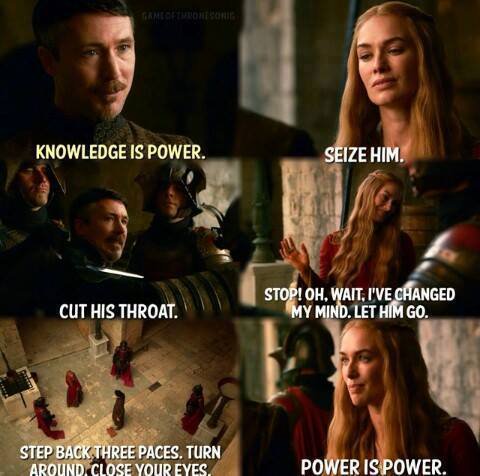 Ruthless and remorseless, Cersei is determined to win the Game of Thrones. No Tyrell scum will get in her way. One is reminded of how her father dealt with the Stark problem during the Red Wedding… He was somewhat more subtle about it though…

But as in all of Cersei’s machinations, something goes terribly awry. On this particular occasion, she loses the last of her children. ‘Gold shall be their crowns and gold their shrouds’ was the prophecy… Well, it has come true. And no matter how much Cersei would like to blame Margaery for estranging her son from her, it is Cersei who is responsible for her son’s suicide. In trying to avoid the effects of a prophecy, Cersei has made it come to pass.

As Jaime returns to King’s Landing, I am sure he will not be too pleased with his sister. She has seized the power she has always wanted but at a terrible human cost. What’s worse, in order to seize the throne she has used wildfire. The last time a King had threatened to use wildfire to burn down King’s Landing, Jaime became a Kingslayer. It is clear that brother-sister tensions will arise.

Meanwhile Sam Tarly has finally made his way into Oldtown. The shot of the library was magnificent, although I had to admit I was a bit sad that it wasn’t filmed in Oxbridge. Sam is finally in his element.. The only problem is that the Maesters will probably insist on Sam giving up Gilly.A man of the Night’s Watch should wed no-one, and a Maester with a wife is unheard of. Sam should be doubly celibate, but he’s being followed about by a girlfriend with a child. I doubt this will go down well…

Bran, Meera and Benjen haven’t been seen for a while. Today they have mostly been involved in explaining the present and the past. Benjen patiently explained (yet again) that the undead cannot pass the wall. Bran’s vision confirmed what all the ardent readers of the Song of Ice and Fire expected. Jon Snow is Lyanna and Rhaegar’s son. Whether legitimate or not, it is not for me to determine.

I’d hazard a guess that he’s not… But he’s the closest that Daenerys has to legitimate competition.

Meanwhile, the event we’ve been waiting for (for the past six seasons) is actually happening. Daenerys Targaryen is finally on her way to Westeros with three dragons by her side. More formidably still, she has managed to name Tyrion as the hand of the queen. I was genuinely moved by that scene. It is so rare for Tyrion to be appreciated by anyone apart from Varys, even when he definitely deserves it.

The most amusing moment today happened in Dorne and involved Varys, when the Sands and Olenna Tyrrell decided to plot against the Lannisters together. When Olenna asks what Dorne has to offer, Ellaria answers 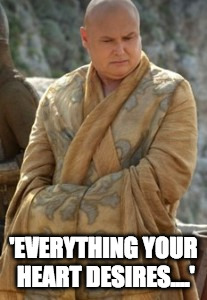 Erm. Not really, but he will do.

But the highlight of the episode for me where the scenes in Winterfell. Littlefinger’s declaration of ambition and lust beneath the Heart Tree was a true test of Sansa’s loyalty to her brother. (Admittedly, I think she would be more tempted if this wasn’t the man who spent most of his life in love with her Mum, and then slept with her Aunt. Ouch)

Yet today was a triumphant day. Lyanna Mormont secured the North’s loyalty to Jon Snow and the entire hall was cheering for ‘THE KING OF THE NORTH’. I joined in. Though Rob Stark’s fate was a painful memory in the back of my head.

Robb got avenged tonight. Though it wasn’t lord Manderly who made the Frey pies, they were still impressively scary. And Arya’s determination to make Waldo Frey suffer makes us feel that far from being No-One, she is the spirit of vengeance for the Starks. THE NORTH REMEMBERS, she might well have said, as she sliced Waldo’s throat. Indeed, it does. There must always be a Stark in Winterfell. Let us hope Bran makes his way there quickly.