“With a rule and a pair of scales, and the multiplication table always in his pocket, sir, ready to weigh and measure any parcel of human nature, and tell you exactly what it comes to. It is a mere question of figures, a case of simple arithmetic.”

Modern life has an interesting love-affair with fact. On the one hand, we are obsessed with collecting data: our smartwatches take note of our every move and we are encouraged to take note of exactly how many calories we eat. On the other hand, we have a growing distrust of experts and the rise of what Donald Trump’s adviser Kellyanne Conway calls ‘alternative facts’. How to explain this rather incredible juxtaposition which is present in most of the Western world?

Part of our need for data collection is about control. Data collection allows us to monitor our heart rate, to monitor our blood pressure, to share the details of our every movement on the GPS so we can remember exactly where we took that holiday photograph. They enable us to many things that we would not be able to do on our own. In the past few years  therehave been at least two recent reports of a smartwatch which monitored a person’s vital statistics having saved a person’s life (See: http://www.metronews.ca/news/edmonton/2016/03/17/man-says-smartwatch-saved-his-life.html ; https://www.slashgear.com/apple-watch-heart-rate-monitor-saves-teens-life-20405579/ ) These two reports do not come from highly reliable news sources, but that’s not necessarily important. For the purpose of this argument what matters is that people believe that a smartwatch will help them monitor aspects of their bodily health that they cannot themselves control. In a way, anyone who has trained and measured their heart rate can vouch for that – training with a heart rate monitor has significantly improved my awareness of how I should be pacing myself and made me aware of why I find running so difficult. It has also made me long for a Fitbit since a heart rate measuring strap is a bother.

But data collection in a smartwatch is not necessarily restricted to the user of the appliance. More and more health insurance companies have expressed their interest in accessing user data from smartwatches to assess their clients’ health. And it is not only smartwatches that want us to give others access to our data. Just think of the countless times you’ve clicked ‘agree’ to the omnipresent ‘this website uses cookies’ notice. Cookies, in a quick definition for the less technologically minded, record our browsing activity from a website such as our clicks and logins, but also our previous browsing history. All this is usually used for marketing purposes. Those of us who browse using Google often find that it uses our previous searches to target their current adverts. By the same principle buying a toy for a young cousin of mine has embarrassingly caused a flood of baby toys to appear on my amazon suggestion screen. Yet most human beings (myself included) are blissfully unaware who collects their private information, not to mention where it might be stored. It is this ignorance that our information is being constantly collected by private companies which partially explains the public’s anger at Edward Snowden’s revelation that the US government has accessed citizens’ private information “I don’t want to live in a society that does these sort of things… I do not want to live in a world where everything I do and say is recorded.” Says the lovely innocent Snowden, having moved to Russia where presumably state surveillance is non-existent and he can do whatever he wants. The only thing that is odd about the world Snowden describes is that we are so surprised to be living in it. Everything we do and soon everything we say (with the advent of listening utilities such as Alexa) is recorded, unless we use end-to-end encryption – and if it’s not the government which is listening, private companies definitely are. Remember the surprise when it turned out that Google had been storing every single command you had every spoken to a Google phone and every location you had gone to with such phone in your pocket?

The reason much of this data is collected is that it’s no longer acceptable even for marketers and advertisers to base even most creative hunches on mere intuition. If you read David Ogilvy’s On Advertising you will find that he was already advocating research-based advertising in the 1970s. ‘Know your market” in the 21st century means ‘record your market’s every single move online, whether you have permission for it or not’.

Not to mention that just as for us collecting data from our smartwatch means feeling more in control of our own body, for the governments and private companies collecting our data means feeling more in control of us and our irrational behaviour. Data becomes a crucial denominator of power and companies and government notoriously love to exchange information like this among themselves, whilst usually trying to keep it away from the prying eyes of the public.

What makes matters worse is that data is data. It is a simple fact. But whenever it is used by a government or a private company it is usually governed by an interpretation – and overwhelmingly this interpretation favours the agenda of the people and the ideologies that are quoting the data. The easiest though perhaps not the most literary example I can give of this is a single Bridget Jones going to a dinner full of married people and being forced to respond to the question why she wasn’t married yet “Is it one in three marriages which end in divorce or one in two?”. Compare Bridget’s visceral reaction with the use of statistics by the Colgate advert ‘9 out of 10 dentists would recommend it’. The point is not in the number itself, but in the argument that it’s making. Data is no longer apolitical, but instead, has become a source of conflict.

Worryingly, the people who are not in power are not in control of their own data and are becomingly increasingly weary of both the scientists and the politicians who are usually in charge of interpreting them. Why? First of all, because advertising and politics alike have made us distrust data. One may well ask, how many different brands of toothpaste have been recommended by the same nine dentists?  And which toothpaste does the tenth dentist recommend?

But the second reason for our mistrust of statistics is not simply their abuse. All too often they do not match their perceptions of the world. We do not base our outlooks on a measured analysis of all the information that we have, we base it on a highly selective sample that we have in front of our own eyes (Daniel Kahneman’s excellent book, Thinking Fast and Slow, describes this mentally fallacy concisely as ‘what you see is all there is’). We are a bunch of solipsistic empiricists and we are unwilling to accept information from others no matter how much they try to persuade us.

The US population do not respond well to statistics that are counterintuitive to their own perception of the world, which is why many of them voted for Donald Trump. Just look at the interview with Newt Gingrich (a Trump supporter)

‘Violent crime is down’ the journalist states

‘People feel it, but the facts don’t support it’ the journalist protests.

The interview made it into this John Oliver feature.

John Oliver’s satire is hilarious, but he does miss something. Claiming the precedent of fact over feeling is all very well, but people all too often don’t base their actions on their reason. They base them on their gut. Take this graph of the perceptions of the size of the Muslim population in various European countries from The Economist.

When people demand immigration curbs they do not ground their fears of cultural mistrust on data but on feelings alone. The best way to illustrate this trend of fear of immigrants is a quote from Leszek Kołakowski’s essay on antisemitism ‘postawy antysemickie nie są po prostu innym poglądem na świat – a każdy pogląd może być przedmiotem krytyki – ale najwyżej pozorną artykulacją słowna irracjonalnych stanów, którym nie trzeba uzasadnienia.’ (‘ an anti-Semitic stance is not simply a matter of opinion- every opinion can be subjected to criticism- at most, antisemitism is a vocalisation of irrational states of mind which need no reasons for their existence’)

So, on the one hand, we have the huge corporations and ourselves, obsessed with collecting data, and on the other, we have a population which has a huge problem with interpreting data and selecting the sources which it chooses to trust.

Yet the appreciation for the dominion of fact is such that even those who distrust the statistics and the experts who interpret them feel that they should refer to facts in order to be treated seriously. Kellyanne Conway’s ‘alternative facts’ seek to bring feelings into material and concrete existence.She cannot simply say that facts do not matter, she feels she must invent facts in order to back up her statement. Our data supports a different interpretation, or perhaps we have better, more accurate data.

One is reminded of Humpty Dumpty’s attitude towards words ‘When I use a word,’ Humpty Dumpty said in rather a scornful tone, ‘it means just what I choose it to mean—neither more nor less.’ When I see an event, says the Donald Trump administration, it is exactly as everyone else must see it… This makes the Trump agenda and its followers almost impossible to argue with – how can you put a feeling to a test? We may compare a feeling to a fact, but the state of mind that brought about the feeling remains just the same.

What can we do in this crisis of data and feeling? Importantly, we must remain calm and seek to retain the objectivity of the data that we use at all costs. I write this with the full knowledge that the task is a hard one – fake news affects not only Trump supporters, but also the progressive left. We must only use verified sources of news if possible – waiting for at least two credible sources to confirm the same story (John Oliver appeals for this in his latest episode– incredible as it may seem, I did write this essay before I saw it,). Second of all, in the campaigns and rhetoric that we use we must make sure to stick to the data but to appeal to emotions. This may seem contradictory, but it isn’t. Emotions are not by their nature dangerous – they are weapons that take their shape from the aims of the people who use them. Data is simply not enough to move the masses. Clearly, this aim of combining facts with an emotional appeal is already being fulfilled by excellent UNICEF campaigns like these. 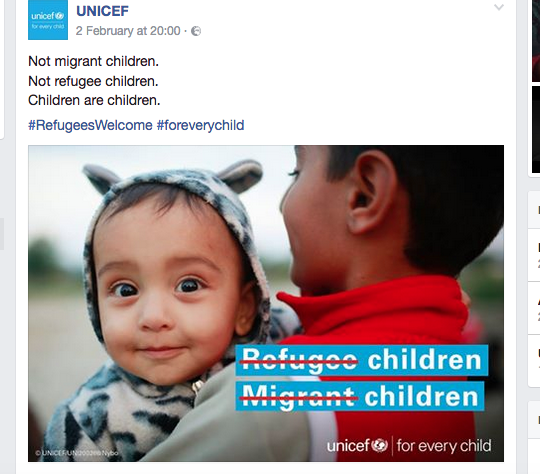 Human nature is not simply a matter of arithmetic, as Dickens knew too well. But arithmetic can give us a better insight into human nature and it can, when used conscientiously, also be a vital sign of objectivity. One does not exclude the other.