One day Tom was in the act of dosing the crack when his aunt’s yellow cat came along, purring, eying the teaspoon avariciously, and begging for a taste. Tom said:

“Don’t ask for it unless you want it, Peter.”

But Peter signified that he did want it.

“You better make sure.”

“Now you’ve asked for it, and I’ll give it to you, because there ain’t anything mean about me; but if you find you don’t like it, you mustn’t blame anybody but your own self.” 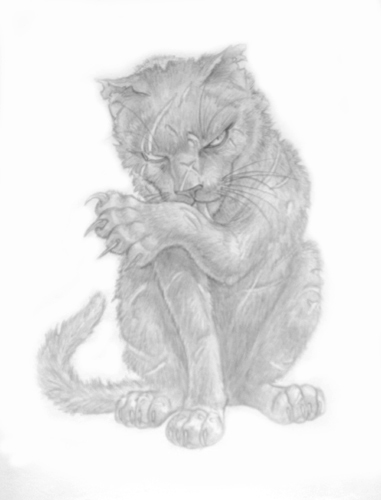 Greebo had spent an irritating two minutes in that box. Technically, a cat locked in a box may be alive or it may be dead. You never know until you look. In fact, the mere act of opening the box will determine the state of the cat, although in this case there were three determinate states the cat could be in: these being Alive, Dead, and Bloody Furious.

‘All ardent lovers and all sages prize,
— As ripening years incline upon their brows —
The mild and mighty cats — pride of the house —
That like unto them are indolent, stern and wise.’

“Actually, I do happen to resemble a hallucination. Kindly note my silhouette in the moonlight.” The cat climbed into the shaft of moonlight and wanted to keep talking but was asked to be quiet. “Very well, I shall be silent,” he replied, “I shall be a silent hallucination.”

‘The Rum Tum Tugger is a terrible bore:
When you let him in, then he wants to be out;
He’s always on the wrong side of every door,
And as soon as he’s at home, then he’d like to get about.
He likes to lie in the bureau drawer,
But he makes such a fuss if he can’t get out.’

5.The cat from John Keats’s Sonnet to a Cat

Cat! who hast pass’d thy grand cliacteric,
How many mice and rats hast in thy days
Destroy’d? – How many tit bits stolen? Gaze
With those bright languid segments green, and prick
Those velvet ears – but pr’ythee do not stick
Thy latent talons in me – and upraise
Thy gentle mew – and tell me all thy frays
Of fish and mice, and rats and tender chick.
Nay, look not down, nor lick thy dainty wrists –
For all the wheezy asthma, – and for all
Thy tail’s tip is nick’d off – and though the fists
Of many a maid have given thee many a mail,
Still is that fur as soft as when the lists
In youth thou enter’dst on glass bottled wall.

‘Nor would it be just, under this head, to omit the fondness which he shewed for animals which he had taken under his protection. I never shall forget the indulgence with which he treated Hodge, his cat: for whom he himself used to go out and buy oysters, lest the servants having that trouble should take a dislike to the poor creature. I am, unluckily, one of those who have an antipathy to a cat, so that I am uneasy when in the room with one; and I own, I frequently suffered a good deal from the presence of this same Hodge. I recollect him one day scrambling up Dr. Johnson’s breast, apparently with much satisfaction, while my friend smiling and half-whistling, rubbed down his back, and pulled him by the tail; and when I observed he was a fine cat, saying, ‘Why yes, Sir, but I have had cats whom I liked better than this;’ and then as if perceiving Hodge to be out of countenance, adding, ‘but he is a very fine cat, a very fine cat indeed.’

James Boswell The Life of Johnson

3. The white kitten from Lewis Carroll’s Through the Looking Glass

‘One thing was certain, that the white kitten had had nothing to do with it:—it was the black kitten’s fault entirely. For the white kitten had been having its face washed by the old cat for the last quarter of an hour (and bearing it pretty well, considering); so you see that it couldn’t have had any hand in the mischief.’

2. Pangur Bán (the cat who gave the title to an old Irish poem, written around the 9th century AD)

I and Pangur Ban my cat,
‘Tis a like task we are at:
Hunting mice is his delight,
Hunting words I sit all night.

When a mouse darts from its den,
O how glad is Pangur then!
O what gladness do I prove
When I solve the doubts I love!

So in peace our task we ply,
Pangur Ban, my cat, and I;
In our arts we find our bliss,
I have mine and he has his.

For I will consider my Cat Jeoffry.
For he is the servant of the Living God, duly and daily serving him.
For at the first glance of the glory of God in the East he worships in his way.
For is this done by wreathing his body seven times round with elegant quickness.
For then he leaps up to catch the musk, which is the blessing of God upon his prayer.
For he rolls upon prank to work it in.
For having done duty and received blessing he begins to consider himself.
For this he performs in ten degrees.
For first he looks upon his forepaws to see if they are clean.
For secondly he kicks up behind to clear away there.
For thirdly he works it upon stretch with the forepaws extended.
For fourthly he sharpens his paws by wood.
For fifthly he washes himself.
For sixthly he rolls upon wash.
For seventhly he fleas himself, that he may not be interrupted upon the beat.
For eighthly he rubs himself against a post.
For ninthly he looks up for his instructions.
For tenthly he goes in quest of food.
For having considered God and himself he will consider his neighbor.
For if he meets another cat he will kiss her in kindness.
For when he takes his prey he plays with it to give it a chance.
For one mouse in seven escapes by his dallying.
For when his day’s work is done his business more properly begins.
For he keeps the Lord’s watch in the night against the adversary.
For he counteracts the powers of darkness by his electrical skin and glaring eyes.
For he counteracts the Devil, who is death, by brisking about the life.
For in his morning orisons he loves the sun and the sun loves him.
For he is of the tribe of Tiger.

One thought on “10 of the best literary cats”